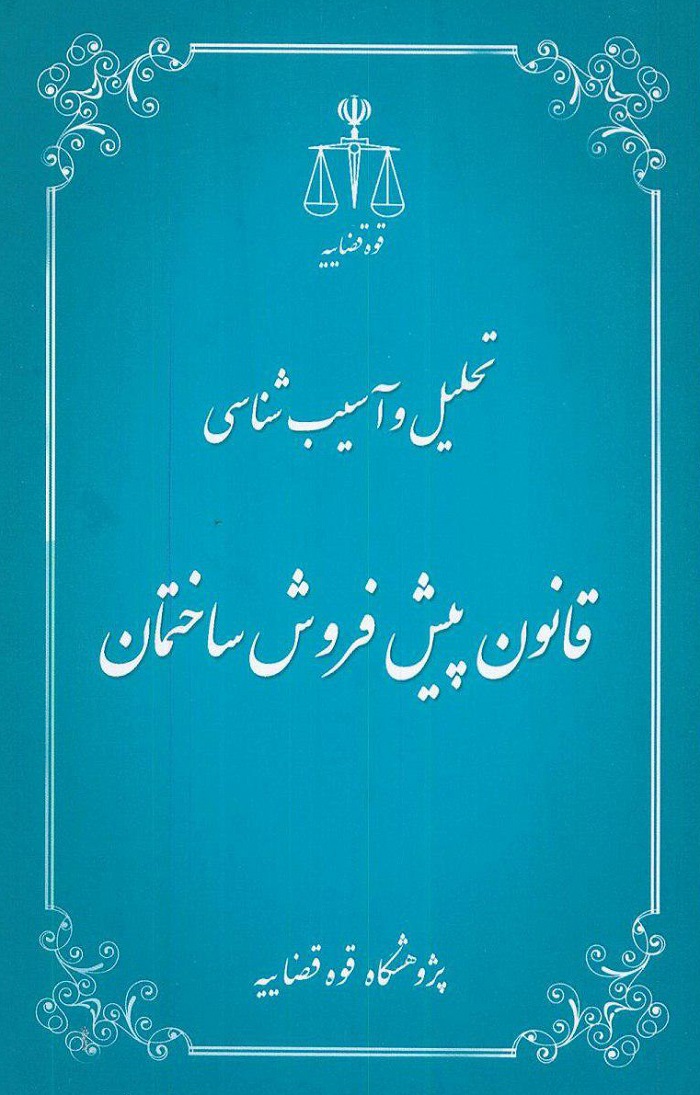 Introduction to my book: “Analysis and pathology of the Act of pre-selling of the building”

Title: Analysis and pathology of the Act of pre-selling of the building

Publisher: Center of publication of Judicial system of Iran

Population growth and urbanization in recent decades has faced the housing market and distributive and services activities with increasing demand and made the immovable properties in Iranian economy to be known as a secure asset and a factor for the economic growth of families.
According to the statistics from the last decade (2007-2017) on average, six percent of the GDP (without the calculation of oil), merely allocated to the construction sector. The significant role of preselling in economic development and emersion from stagnation have made the regulation in this sector one of the severe concerns of the legislator.
Despite the importance of preselling, many problems may emerge around it. Since the building has not been finished yet, knowing about the real intention of the pre-seller by the pre-buyer is difficult, and this matter has made a proper groundwork for fraudulent activities. Even with the
presumption of reaching to the real intention of pre-seller about the construction or completion of the construction unit, pre-seller may sell the building to various persons.
The aforementioned difficulties, probably will lead to an increment of cases in courts of law and consequently jeopardize the efficiency of the judiciary system. Furthermore, specific requirements of the preselling sector and insufficiency of general regulations in this matter resulted in wandering of courts and people about the rights and obligations under the contract. The existence of these problems resulted in the justified intervention of government in the preselling sector.
The first step after the Islamic revolution about the regulating of preselling construction market was the enactment of ‘The legal bill for support of pre-buyers of residential units’ in 1980/01/07 from the Council of the Revolution. The scope of this provision (Act) was restricted to cases in which construction companies of towns or owners of the construction units with more than ten residential units, wanted to presell these units. This provision with breaking the direct financial connection between the pre-buyer and pre-seller aimed to organize the regulations in this sector. Because of the succinctness and inconclusiveness of this provision, and the lack of any sanction about the specified duties, it could not remove any of the difficulties in the preselling sector.
Weaknesses of the aforementioned provision, amplification of problems in the preselling sector and incidence of numerous disputes like the case of negine-gharb , provided the background for a fundamental review of the preselling rules. Therefore, due to the suggestion of the council of judicial development, preparation and codification of the bill of construction preselling, delegated to a group of consisting three law professors. With the
suggestion of judiciary branch, the drafted bill was passed by the board of ministers in the session of 2007/08/15 and filed to the Islamic Consultative Assembly (Parliament) in 2008/06/30. According to the drafters, the purpose of drafting the bill was to protect the weaker party, i.e., prebuyer; Thus on the one hand, the ruled and regulations was meant to be mandatory and on the other, notwithstanding the adopted contract format of the parties,
to be applicable on that contract. Also, drafters tried to lay down some provisions about the complete indemnification of pre-buyer and provided mandatory insurance, so that in case of incidence of loss, pre-buyer does not face with the insolvency of pre-seller. After reception of the bill by the parliament and its review in the research center of the consultative assembly and the guardian council, the bill was through some numerous
changes that in some areas was adverse to the initial purposes of the drafters and finally in 2011/01/02 turned into the Act of preselling of the building .
Although the Act of preselling of building was passed by the parliament and confirmed by the guardian council with the intention to prevent adverse dealings, decrement of referrals to the courts, debarment of incidence of disputes with regard to the description of pre-sold units, forbiddance
of pre-seller with regard to violations in performing his obligations and the so like purposes, the Act was faced with many executive hindrances and it can be even said that after seven years from its enactment, it didn’t precisely be implemented in any part of the country. Involvement of multiple organizations by the legislator for implantation of the Act, lack of attention to the legal nature of preselling contract, lack of regard to the commercial customs and the role of realtors in the process of preselling, want of appropriate notary mechanisms, mere reliance on criminal sanctions and absence of civil sanctions (remedies) and existence of uncertainties in technical certificate and duties of supervisor engineer can be known as the reasons to nonimplementation of this Act. The Act is flawed regarding legal analyses and sometimes due to the lack of single legislative policy among the government (executive branch), parliament and guardian council, it has departed from its purpose and ultimate end. In some instances, these flaws have made the provisions of this Act to be without any justification.
On the one hand, Importance of the sector of building preselling and on the other, flaws of the Act of preselling of building necessitates the review and pathology of the Act. Any correction or reenactment in this area, without precise analysis of the current Act, is a clear mistake; so this treatise with basing the Act of preselling of the building and the relevant documentations , wants to first, review the uncertainties and various legal issues in this area and to
provide the best interpretation for implantation of the act and second, to pose defects of the Act and to propose best suggestion for removing its executive and analytical problems. In this regard, we consider the nature of preselling contract (chapter one), subject of the preselling contract (chapter two), implied terms of the preselling contract (chapter three), whether it is translative or promissory and the time of passing the ownership (chapter four), consensually or formality of the preselling contract (chapter five), parties to the preselling contract and assignment of obligations (chapters six) and criminal sanctions of the preselling Act (chapter seven).